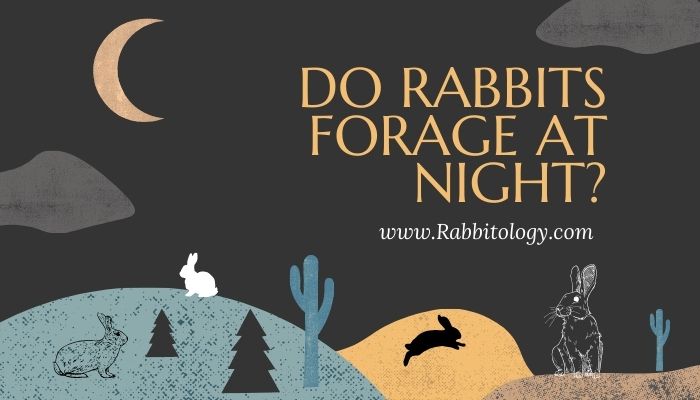 Pet owners often ask when bits eat as they have to feed them in a timely manner. They often get worried when they hear that bunnies are super active during the night and do all the activities like eating and playing. The truth is just like humans; rabbits follow their own circadian rhythms. Humans are diurnal, active during the day, and sleepy during the night. But, unlike humans, rabbits are crepuscular animals.

What Does Being Crepuscular Mean?

Other animals who are crepuscular include; bears, cats, jaguars, wombats, wallabies, foxes, and squirrels. It is not the end of the list. In fact, there are many more.

Why Are These Animals Crepuscular?

Rabbits are prey animals and have adapted this behavior to escape the predators. Most of the predators are active during the middle of the day or the night, and rabbits spend these hours sleeping. As a result, they save themselves and their babies from being eaten away.

Do Crepuscular Animals Relate to Nocturnal or Diurnal?

Diurnal animals are those that sleep during the night and are active during the day. They include human beings. Their body temperature falls at night. They have more cone cells than the rod cells in their retinas, giving them better vision during the bright hours of the day. Examples of diurnals include; dogs, deer, elephants, hawks, honeybees, and butterflies.

What Is the Eating Pattern of Wild Rabbits?

Wild rabbits eat during the twilight hours. The adult wild rabbits come out of their nests or animal shelters at the time of dawn and dusk. They find their food and return to their nests before there’s complete light or complete dark outside. Such animals that feed during times of low light intensity are called crepuscular feeders.

What Is the Eating Pattern of Pet Rabbits?

Pet rabbits are crepuscular feeders, too, just like wild rabbits, and follow the same pattern. Pet rabbits eat their food early morning or late in the evening. Baby rabbits follow adult rabbits in everything they do. The only difference is that the grown-up rabbits can eat on their own while baby rabbits cannot. The babies or the kits are entirely dependent on the milk of the female rabbits.

The owner might try to change his pet bunny’s eating and sleeping pattern. In such a case, rabbits tend to follow the owners and end up adapting their eating behaviors as they explicitly opt for it, but it takes some time. The same behavior, however, cannot be developed among wild rabbits.

Do Wild Rabbits Hunt at Night?

No, wild rabbits neither hunt at night nor during any other parts of the day. Why would they go hunting in the first place? Wild rabbits are herbivores and eat green plants, vegetables, leaves, etc. Unlike carnivores, they don’t eat meat and therefore do not hunt either. Carnivorous critters in the wild forage for other prey animals. On the other hand, wild rabbits do forage during the last hours of the night, but they go out in search of hay, plants, vegetables, seeds, or fruits. This is the time of the dawn when a rabbit goes out in the wild in search of food when the majority of the other creatures are asleep.

What Do Rabbits Eat?

Rabbits are herbivorous mammals. Both wild and domestic rabbits feed only on green plants and plant products. The digestive system of a rabbit is designed in such a way that it can digest only high fiber foods with less protein and sugar contents in them. Moreover, rabbits eat plants that are rich in fibers so that they can wear down their continuously growing incisors. Therefore, a rabbit’s diet usually consists of fresh hay and water. Being rich in fibers, hay goes hand in hand with a bunny’s diet. Timothy hay, oat hay, meadow hay, and alfalfa hay are all eaten by a rabbit. The richest of all these is the timothy hay.

Although domesticated baby rabbits can feed commercially available on a pelleted diet, these are less suitable for adults. This is because these pellets are rich in protein supplements and essential vitamins, which the baby rabbits need for their growth. On the other hand, adult rabbits gain weight if they eat these. Therefore, their diet should ideally consist of hay or grass.

These small mammals have a special digestive system that is designed to digest high-fiber foods. As a result, protein is very low in their nutritional chart. Hence they don’t eat meat. Besides this, both the pet and wild rabbits eat more fibrous green plants as they help them wear down their teeth. It is a necessary act as their teeth grow continuously.

Do you know what happens when a rabbit eats meat? Too many proteins are not digested in the rabbit’s stomach. As a result, Microflora of the rabbit’s gut is unable to ferment the food completely. Incomplete fermentation results in different products that are not normally present. These products can alter the pH of the rabbit’s gut. The changed pH results in less activity of enzymes that disturb the metabolism and can even stop it temporarily. Moreover, the environment doesn’t remain favorable for the growth of microorganisms that aid digestion. As a result, even healthy bunnies get sick when they eat meat.

Why Do Rabbits Purr While Eating?

Purr is similar to the deep sound made during the light chomping. Rabbits purr when they are happy and content. It is similar to that of a cat’s purr but is louder. You can see your rabbit purr when you feed him. Food is his favorite thing, and he likes eating. If he shows this sign while eating, it definitely means he is in love with the food.

If your bunny is sad, you can make him happy easily. Bunnies are innocent creatures and need a bit of love and affection. Sometimes, you need to give them some fresh hay and a water bowl to make them happy. Sometimes wooden toys are enough to fulfill this purpose within a few minutes.

Why Do Rabbits Grind Teeth While Eating?

A rabbit grinding its teeth is another way of saying, “I am happy.” Again if it’s because of food and eating, he is probably the happiest creature on the Earth enjoying his favorite thing. If the rabbit’s teeth stop grinding while eating, he might have eaten something hard like a rock.

Bunnies have a unique personality and use more body language as they are not much talkative. Besides purring and grinding teeth, they show different signs when they are sad, aggressive, or afraid.

Why Do Rabbits Eat Their Own Droppings?

It’s normal for a rabbit to eat its own droppings. This is part of their digestion, also termed hindgut fermentation. When an animal eats its own poop, the process is called coprophagy, and one such example of coprophage is rabbit.

Bunnies digest their meal twice and hence make two types of droppings. The first round of digestion produces clustered soft pellets that are glossy and rich in nutrients and fibers. These are called cecotropes. The rabbits consume these cecotropes and digest them again. In this second round of digestion, the rabbits excrete hard fecal pellets, which are actually the round pellets you see in its litter box. The purpose of coprophagy is to absorb all the nutrients in the foods completely by digesting them twice.

Why Do Rabbits Sleep Too Much?

If you have a bunny in your home, you might have noticed him sleeping during most of the hours in the day. Due to this behavior of the domestic rabbits, owners often think if their bunny is sick somewhere. Others ask whether bunnies are nocturnals because they sleep all day.

The most probable reason for a rabbit sleeping too much is because it’s crepuscular. Your bunny will sleep during most of the day and night hours and will be active during dawn and dusk. When you’re probably asleep, your bunny will be spending this time playing, jumping, eating, grooming, foraging, or going through a digging box or some toys.

Why Are They Presented as Easter Gifts?

Easter is celebrated in the remembrance of the rebirth of Jesus. On this occasion, bunnies are used as a symbol of rebirth. The reason behind this is the forever fertility of the bunnies. Does get pregnant whenever they mate with bucks. Their gestation period is 30 days, which means rabbits can get pregnant 12 times a year. A rabbit can conceive 1 to 12 kits at a time and can get pregnant by mating the male right after giving birth to the young ones.

Why Are Rabbits Mostly Scared?

Bunnies are prey animals, and their only danger is the presence of some predators. A wild rabbit and a pet rabbit are afraid of predators. They also get scared when they hear loud sounds like fireworks, thunder, or children playing around. This is because they have an excellent sense of observing even minor things and hearing the slightest sounds. This ability makes them more sensitive to sounds, and the bunnies are thus scared more quickly.

Do Rabbits Get Aggressive?

Rabbits get aggressive at times. They have a territorial nature and protect their territory by all means. They often mark their territory by either peeing at the boundary or marking the area by the scent glands right under the chin. If a bunny from another family or another animal belonging to an entirely different species enters their territory by mistake, they get very aggressive. The wild and the pet bunnies show this behavior when the owners put their hands in their hutch.

When bunnies mature sexually, they have a rush of hormones in their bodies. This hormonal change can make them aggressive too. This aggression is the sign that the rabbits should be neutered or spayed.

The rabbit is a crepuscular animal, meaning it is most active during dawn and dusk. The wild rabbit has adapted this characteristic to save itself from the voracious predators out there.

This instinct is naturally found in pet bunnies too. When most of the animals are asleep during the twilight, wild rabbits go out and forage for the different plant foods like leaves, fresh hay, seeds, vegetables, and fruits. They are not meat eaters and therefore do not hunt other creatures.